Despite growing awareness, Alzheimer’s disease and other dementias are still frequently misdiagnosed. Often, pathologists notice postmortem that the clinical diagnosis the patient received during life was wrong. And while brain imaging is increasingly used to improve diagnoses of neurodegenerative diseases, it's not always easy to interpret a scan. Diagnosing clinicians and radiologists may be stumped by a certain pattern of atrophy, or perhaps an image doesn't seem to match the patient's symptoms. A new book by imaging specialists aims to help make sense of it all.

"So often we see a brain scan and think, 'There's a message in there,'" said Nick Fox, a clinical neurologist at University College London, U.K., and coauthor. He and his colleagues think that, rather than reread literature on dementia and try to find the underlying condition, it makes more sense for a diagnosing physician to employ a resource that uses an image as a starting point. "To look up the features of some rare disease, I have to know what to look up," he said.

So Fox teamed up with three other imaging specialists to compile Neuroimaging in Dementia, a comprehensive, one-stop shop handbook meant to lead step-by-step from image to diagnosis. While conventional online resources or books start with a description of a disease and describe what the accompanying scans might look like, this book starts with an image, Fox explains.

In flowchart style, the book categorizes diseases into four main groups by the dominant imaging patterns visible by magnetic resonance imaging (MRI): grey matter loss, vascular dementia, white matter disorder, and brain swelling. Those large sections are then subdivided into smaller ones, each of which describes a disease, shows scan examples, and suggests additional confirmatory tests.

"It's to help people approach the investigation of the patient in a rational, structured way," said Fox.

The book's early chapters go through the basics. A classification tree in Chapter 1 gives an overall route map of the logical steps from the first scan to the various overall diagnoses. Chapters 2 and 3 give an overview of dementia and detail what types of scanning are now available. Chapter 4 describes what normal aging looks like on scans, to differentiate it from the plethora of dementia causes to follow.

Then the authors delve into the four categories of abnormal scans and their associated diseases. For instance, the Alzheimer's disease section falls under the primary grey matter loss chapter. The section briefly outlines the history, histopathology, and genetics of Alzheimer's, as well as its clinical presentation. Then it shows full-color examples from the authors' and collaborators' labs of scans that typify progression of the disease: MRI, single photon emission computed tomography (SPECT), and positron emission tomography (PET), among them. Certain images even detail the early stages and progression of early onset AD, such as Figure 5.15 (below).

Tables are placed throughout the text for quick reference to guide a doctor's next steps in the diagnostic process—which tests to order in what sequence. The tables also detail what clinical clues to watch out for, and flag signs that Alzheimer's may be the wrong disease candidate. For instance, Table 5.8 (below) highlights details on an MRI or CT scan that might signal another disease is at work. Anterior but not posterior hippocampal atrophy might signal frontotemporal lobar degeneration (FTLD), for example. If a clinician found that to be the case, he or she could then flip to the FTLD section of the book to find the associated clinical presentation, and scan options and image examples. 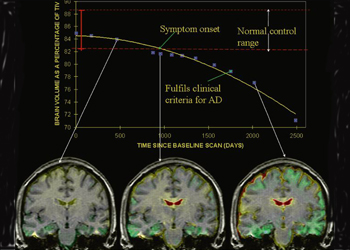 The book takes this approach for other primary grey matter loss disorders, such as prion-linked dementias, as well as for the range of other types of dementia it covers. However, the book isn't meant to be an encyclopedia of dementia causes, Fox said. Rather, it's meant to provide the necessary information to lead to a diagnosis, after which a radiologist or clinician can look up more details using other resources.

An update to the 2002 version called Magnetic Resonance in Dementia, the book is both streamlined to be a hands-on diagnostic guide and broadened in scope to reflect today's varied imaging technology and views on dementia, said coauthor Philip Scheltens, director of the Alzheimer's Center at the VU University Medical Center in Amsterdam. Both Scheltens and Fox helped shape recently revised diagnostic guidelines (see Alzforum Webinar) for AD, which call for increased use of brain imaging to hone the diagnostic process, particularly at the early stages.

"We have redone [the book] completely," Scheltens said. "We've cut down the text on the specific diseases, incorporated new criteria and thinking about diagnostic classification, and included more modalities. It's the only comprehensive, complete book on dementia today."

In a future version, the authors would like to put the book into a Web-based format containing many more browse-friendly images to which clinicians can match their own patients' scans, Scheltens added.

"Neuroimaging in Dementia is a gem of a book," said Stephen Salloway, Director of Neurology and the Memory and Aging Program at Butler Hospital in Providence, Rhode Island. "Beautifully illustrated and well-balanced, its intelligent design contains the collective wisdom of a team of internationally acclaimed cognitive neurologists and neuroradiologists."—Gwyneth Dickey Zakaib.

Gwyneth Dickey Zakaib is a writer living in Washington, DC.