This mutation was first identified in a patient diagnosed with probable early onset Alzheimer's disease. The patient, who was identified as Patient 6 in the study, was from Germany and had a positive family history of dementia. Her mother and maternal grandmother had died at 48 and 51 years old, respectively. The patient had disease onset at age 46 (Finckh et al., 2000).

This mutation was identified in a second, presumably unrelated, German patient who also had a family history of dementia. The patient, identified as P. 48, had disease onset at age 50. The patient's father and paternal uncle also had been diagnosed with dementia (Finckh et al., 2005).

In addition, this variant was identified in a screen of patients with early onset AD from 28 French hospitals (Lanoiselée et al., 2017). Families were included when at least two first-degree relatives, spanning two generations, suffered from early onset AD with an age of onset of 65 years or younger. Age at onset in this pedigree, which included one affected mutation carrier, ranged from 45 to 47 years, and disease duration ranged from two to seven years.

When transfected into fibroblasts lacking endogenous PSEN1 or PSEN2, the T122P mutation did not affect steady-state levels of the proteolytic products PSEN2-CTF and PSEN2-NTF compared with wild-type PSEN2. When co-transfected with APP carrying the Swedish mutation, the T122P mutation produced elevated levels of Aβ42 and increased the Aβ42/Aβ40 ratio (Walker et al., 2005). 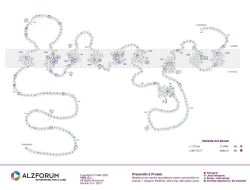