This variant was originally identified in a screen of patients with early onset Alzheimer's disease from 28 French hospitals (Lanoiselée et al., 2017). Families were included when at least two first-degree relatives, spanning two generations, suffered from early onset AD with an age of onset of 65 years or younger. The proband's age at onset was 57 years, and disease duration was six years.

It was also reported in an individual with early onset AD from the Dominantly Inherited Alzheimer Network (DIAN) Extended Registry (Hsu et al., 2018). The individual had an age at onset of 58 years. One of their parents and a sibling of their parents was also affected by AD.

The variant was absent from the EVS and ExAC variant databases.

Biological Effect
Mouse neuroblastoma cells expressing APP695 (N2A695) and the PSEN2 R284G variant produced more Aβ42 and had a higher Aβ42/Aβ40 ratio than N2A695 cells expressing wild-type PSEN2. In silico algorithms predicted R284G to be probably damaging (PolyPhen) and damaging (SIFT), and its PHRED-scaled CADD score, which integrates diverse information in silico, was above 20, suggesting a deleterious effect (CADD v.1.6, Nov 2021). In addition, R284 is conserved between PSEN2 and PSEN1. Based on their pathogenicity classification scheme, Hsu and colleagues described it as probably pathogenic (Hsu et al., 2018; Hsu et al., 2020). 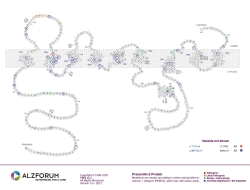