This PSEN2 variant has been reported in several individuals with Alzheimer's disease or frontotemporal dementia, as well as some healthy family members. Currently, there is no evidence that it segregates with disease, and in fact, it has been shown not to segregate with disease in one family. Moreover, the variant is present in the gnomAD variant database at a frequency of 0.0005869, including 165 heterozygotes of different ethnicities and one South Asian homozygote (gnomAD v2.1.1, Nov 2021).

The M174V variant was subsequently reported in a woman who developed Alzheimer’s disease at age 54. Due to a lack of family history and the fact that this residue is not conserved between presenilin-1 and presenilin-2, M174V was described by the authors as possibly pathogenic (Guerreiro et al., 2010).

A later study found this variant in a family with a history of late-onset AD, but it did not segregate with disease. Specifically, M174V was detected in one affected individual and three healthy family members. In addition, some affected members of the family were not carriers, arguing against pathogenicity (Cruchaga et al., 2012).

Another study reported the M174V mutation in two unrelated Turkish individuals, both exhibiting symptoms consistent with frontotemporal dementia. One patient developed symptoms at age 52, starting with progressive non-fluent aphasia, followed by postural instability, gait disturbance, and dystonia in the right leg. There was a history of neurological disease in the family. The proband's father had Parkinson’s disease and his maternal grandfather died at age 38 from an unspecified neurological disease. His parents were first cousins. The proband's sister was also a mutation carrier. She was healthy at the age of 36.

The second Turkish patient developed changes in mood and personality, notably increased aggression, at age 60. Progressive deficits in speech and attention followed. He was described as having a “frontal syndrome” characterized by a deficit in executive function. His mother had clinically significant memory problems and died at age 64 from a stroke. Segregation with disease could not be determined (Lohmann et al., 2012).

A study based in the U.S. also reported a woman who carried the mutation and had a family history of dementia (Wojtas et al., 2012). Her first clinical symptom, memory loss, emerged at age 45. Of note, she was homozygous for the APOE4 allele.

In addition, the mutation was identified in a Spanish individual with AD confirmed by positive cerebrospinal fluid AD biomarkers (Ramos-Campoy et al., 2020). There was no family history of AD. Age at onset was 50 years. Of note, this patient also had a missense variant in the ABCA7 gene (S1629L) which had not been reported before.

Unknown. Imaging in one affected carrier showed bilateral atrophy in the parietal lobe and hypoperfusion in temporoparietal regions (Guerreiro et al., 2010). Imaging in the two Turkish individuals with FTD showed cortical and anterior temporal lobe atrophy in one individual and frontal atrophy and hypometabolism in the frontotemporoparietal regions in the other patient (Lohmann et al., 2012).

M174V is located in the third transmembrane domain of PSEN2. The residue is not conserved in presenilin-1. Although it was predicted benign by in silico algorithms PolyPhen-2 and SIFT (Cruchaga et al., 2012; Lohmann et al., 2012, Hsu et al., 2020), it was predicted deleterious by LRT, Mutation Taster, FATHMM, Radial SVM, and LR (Ramos-Campoy et al., 2020). Its PHRED-scaled CADD score, which integrates diverse information in silico, did not reach the commonly used deleteriousness threshold of 20 (CADD v.1.6, Nov 2021). Ramos-Campoy and colleagues suggested the variant may be a risk modifier or have low penetrance. 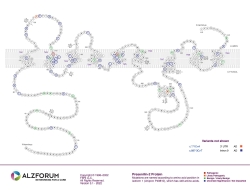