This variant was found in a whole-exome sequencing screen for rare variants in genes associated with Alzheimer's disease (AD), frontotemporal dementia, and prion disease in a Dutch cohort of 68 patients with early onset AD (Wong et al., 2019).

The proband was a woman who started having symptoms at age 53. During the first three years of disease, she developed progressive anomia and memory loss. She was depressed and apathetic. Neurological examination two years after onset showed cognitive decline, short-term memory impairment, dyscalculia, bradyphrenia, and apraxia. She subsequently developed behavioral changes, including aggression, restlessness, obsessive thinking, blunted emotions, and binge eating.

The clinical diagnosis was either presenile AD with frontal presentation or a behavioral variant of frontotemporal dementia. After admission to a nursing home, she developed hallucinations, seizures, spasticity, and mutism. She died of pneumonia at 64. The patient’s mother had been diagnosed with AD at age 75.

Neuropathology
Neuropathological examination of the proband was consistent with advanced stage AD with severe neuronal loss and gliosis of the frontal, temporal, occipital, and parietal cortices, as well as the hippocampus (Wong et al., 2019). Amyloid plaques and tau tangles were found in the neocortex, predominantly in the frontal cortex, and to a lesser extent in the parietal and temporal cortices and CA1 of the hippocampus. A small number of plaques were Aβ40-positive. In addition, Lewy bodies were found in the amygdala and parahippocampal cortex, and to a lesser extent in the substantia nigra and brainstem.

Biological Effect
The biological effect of this variant is unknown. Its PHRED-scaled CADD score, which integrates diverse information in silico, was slightly above 20, suggesting a deleterious effect (Wong et al., 2019). Wong and colleagues classified the variant as probably pathogenic using the Guerreiro et al., 2010 guidelines. 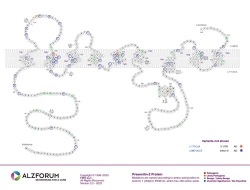