This variant was first identified in 2001 in a group of families from Puerto Rico and the Dominican Republic (Athan et al., 2001; Rogaeva et al., 2001). It is now linked to Alzheimer's disease in more than 70 families of Caribbean-Hispanic ancestry (Lee et al., 2014). The mutation is associated with a variable age at onset, generally ranging from about 40 to 73 years of age, with some individuals remaining free of clinical symptoms into their 90s. Indeed, the variant was classified as most likely having reduced penetrance, with an allele count of three, and a frequency of 0.0012 percent in the gnomAD variant database (Koriath et al., 2018). In the non-neuro subsection of gnomAD, the variant has an allele count of 2 and appears at a frequency of 0.000009609 (gnomAD (non-neuro) v.2.1.1, July 2021). Variants in different genes, such as the gene encoding the lipid phosphatase synaptojanin 1, may contribute to the high variability in age of onset (Miranda et al., 2018; Jun 2018 news).

In a study of 19 Caribbean-Hispanic families affected by early onset AD, eight probands were found to carry the G206A mutation. The families all originated from Puerto Rico and the Dominican Republic, and microsatellite testing revealed a common ancestor. The mutation did not strictly segregate with disease; five family members had AD but were not mutation carriers. However, the mean age at onset was earlier in mutation carriers (54.5 ± 7.1 years) than in non-carriers (68.9 ± 9.5 years), suggesting that disease in the latter group may have been sporadic (three were homozygous for APOE4) (Athan et al., 2001).

Further underscoring the prevalence of this mutation in Hispanics with early onset AD, 13 of 27 EOAD cases identified in Florida were found to carry the G206A mutation. The average age of onset was 54.8 (range: 42-63) and average age at death was 62.2 (range: 50-70 years). Out of 63 Hispanics with late-onset AD, none carried this mutation. Of the 13 mutation carriers, two were female, and 11 had a known family history of AD. Haplotype-sharing analysis confirmed a common ancestor for all G206A mutation carriers in the cohort (Ravenscroft et al., 2016).

In a study of 283 Hispanic patients assessed at an Alzheimer’s Disease Center in Philadelphia, 19 carried the PSEN1 G206A mutation and were diagnosed with dementia (17 AD, one vascular dementia, one frontotemporal dementia). Compared with noncarriers with AD, these individuals had younger ages of onset, lower frequency of APOE ε4 genotype, and lower rates of hypertension. The mean age of onset for carriers was 59.6. Carrier performance in psychometric tests was similar to non-carriers. In three mutation carriers, total tau and phospho-tau levels in the CSF were abnormally elevated, and two of the three had abnormally low Aβ levels (Arnold et al., 2013).

The mutation was also found in one individual of a cohort of 111 pathologically confirmed cases of dementia with Lewy bodies (DLB). The patient was a woman diagnosed with DLB at age 56 who died at age 64 with robust AD pathology revealed at autopsy (Geiger et al., 2016).

When co-expressed in HEK-293 cells expressing APP with the Swedish mutation, the mutant presenilin-1 produced a 2.2-fold increase in secreted Aβ42 compared with cells expressing wild-type presenilin-1. Secreted Aβ40 levels were comparable between the two cell lines (Athan et al., 2001). In vitro experiments using isolated proteins, however, revealed a decrease in both Aβ40 and Aβ42 production and an increase in the Aβ42/Aβ40 ratio (Sun et al., 2017).

A cryo-electron microscopy study of the atomic structure of γ-secretase bound to an APP fragment suggests mutations in this residue could alter the protein's local conformation and affect the positioning of residues that directly contribute to substrate binding (Zhou et al., 2019; Jan 2019 news). In silico algorithms predicted this variant is probably damaging (Polyphen) and deleterious (SIFT) (gnomAD (non-neuro) v.2.1.1, July 2021).

*Carriers of this variant had heterogenous phenotypes.

Well-established in vitro or in vivo functional studies supportive of a damaging effect on the gene or gene product. G206A: Functional observations are mixed, but they consistently showed an increase in the Aβ42/Aβ40 ratio.

Lack of segregation in affected members of a family. G206A: Non-affected carriers and affected non-carriers reported, although the latter had later disease onset and 3/5 were APOE4 homozygotes. 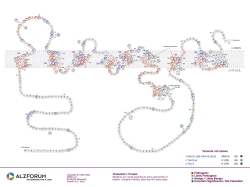