This mutation, near the γ-secretase cleavage site in APP, was first reported in a German pedigree. The proband was a 50-year-old woman with a family history of dementia consistent with autosomal-dominant inheritance. She demonstrated progressive cognitive impairment and fulfilled NINCDS-ADRDA criteria for probable Alzheimer's disease. The mean age of onset for the four affected members of this family was 52 years (Cruts et al., 2003).

This mutation was also found in a female patient in Poland who met NINCDS-ADRDA criteria for probable Alzheimer's disease with significant impairment of verbal memory and decline in visuospatial functioning. Symptoms started at age 42. Family history was unavailable (Zekanowski et al., 2003).

The V715A mutation was also found in a large French study reporting 56 new families with autosomal-dominant, early onset Alzheimer’s disease. All probands met NINCDS-ADRDA criteria for probable AD and had a family history of disease (Wallon et al., 2012). The V715A mutation was detected in one individual in a family known as EXT 147, which had 10 known affected family members. Only the genotype of the proband is known, therefore segregation with disease could not be determined. Age of onset in this family ranged from 40 to 44 years of age, with a six- to 13-year disease course. The mutation was classified as definitely pathogenic according to the algorithm proposed by Guerreiro et al., 2010.

This mutation increased the Aβ42/Aβ40 ratio approximately fourfold in HEK293 cells (Cruts et al., 2003). A similar increase was also observed in primary neuronal cultures, with a decrease in Aβ40 and an increase in Aβ42 (De Jonghe et al., 2001). A study using NMR spectroscopy found that this mutation, along with V715M at the same position, altered the structure and dynamics of the transmembrane domain in APP, making it more accessible to γ-secretase for ε-cleavage, and consequently shifting production toward Aβ42 (Chen et al., 2014). 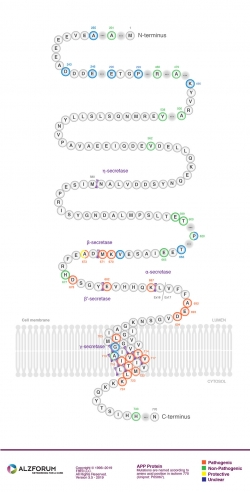