Carriers of this mutation develop a severe hereditary form of cerebral amyloid angiopathy (CAA), known as hereditary cerebral hemorrhage with amyloidosis, Dutch type (HCHWA-D). This disease is associated with recurrent strokes during the fifth and sixth decades of life. In addition to severe hemorrhages, extensive amyloid develops in the vasculature. The mutation has been described in three Dutch families (Wattendorff et al., 1982; Luyendijk and Bots, 1986) and it is estimated that as many as 500 descendents of these families are at risk of the disease. An additional affected family of Dutch descent was described in Western Australia (Panegyres et al., 2005). The discovery of this mutation was an early demonstration that a variant in the APP gene could cause severe amyloid deposition (Levy et al., 1990; van Broeckhoven et al., 1990; Fernandez-Madrid et al., 1991).

This mutation is associated with severe amyloid deposition in cerebral vessels, hemorrhages, and diffuse plaques in brain parenchyma (Timmers et al., 1990). Extensive Aβ accumulates in the cerebral vessels, especially the meningeal arteries and the cerebro-cortical arterioles. In people with HCHWA-D, the amount of CAA is correlated with dementia, whereas parenchymal plaque density and intraneuronal neurofibrillary tangles are not (Natté et al., 2001). In contrast to patients with AD, neurofibrillary tangles are not a prominent neuropathological feature of HCHWA-D.

This mutation results in the accumulation of Aβ in cerebral vessel walls. This pathology leads to cell death and loss of vessel wall integrity, which in turn makes the vessels prone to obstruction and rupture, manifesting clinically as hemorrhages and infarcts. In vitro, this mutation accelerates Aβ aggregation, leading to increased fibril formation (Wisniewski et al., 1991). It also alters the processing of APP, increasing the relative quantities of Aβ beginning at Asp1, Val18, and Phe19 (Watson et al., 1999). This mutation is associated with high levels of β-sheet conformation and induction of apoptosis in cerebral endothelial cells compared with wild-type Aβ (Miravalle et al., 2000). Moreover, its PHRED-scaled CADD score, which integrates diverse information in silico, was above 20, consistent with it having a deleterious effect (CADD v.1.6, Oct 2021).

*Although not AD, the condition associated with this variant is inherited in an autosomal dominant manner, so its pathogenicity was classified using the ACMG-AMP guidelines.

Patient’s phenotype or family history is highly specific for a disease with a single genetic etiology.

Transgenic APP with the Dutch mutation has been introduced into several mouse lines that model CAA and vascular amyloid in AD. The models, such as the well-characterized Tg-SwDI and APPDutch mice, develop prominent vascular amyloid. 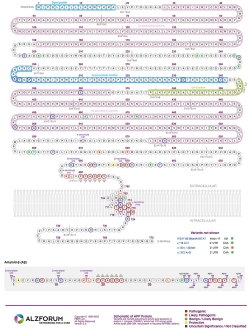