This mutation was identified in a Japanese pedigree with clinical features consistent with Alzheimer's disease (e.g., progressive dementia without significant cerebrovascular complications) (Wakutani et al., 2004). The proband's age at onset was approximately 60 years. She and a sibling who was also demented carried the mutation, whereas a nephew who was unaffected at age 68 did not, suggesting cosegregation with disease.

Subsequently, a Caucasian woman initially diagnosed with frontotemporal dementia was found to be a homozygous carrier of this mutation (Mastromoro et al., 2019). Symptoms of primary progressive aphasia were apparent by age 34, although her guardian reported that she began exhibiting speech difficulties and experiencing seizures at age 21. The patient died at age 42 from respiratory complications. This patient had a family history of Alzheimer’s disease: her mother, four maternal uncles, and her maternal grandmother were clinically diagnosed with AD in their 60s; an additional maternal uncle and two aunts were unaffected. Genetic testing led to the suspicion that the patient was the offspring of inbreeding between her mother and one of her mother’s affected brothers. Genotype data were available from only one other family member—the patient’s half-brother on her mother’s side, asymptomatic at age 50, was heterozygous for the mutation. The earlier onset and more rapid disease progression in the proband, compared with other affected family members, raise the possibility of a semi-dominant pattern of inheritance.

The D678N mutation alters an amino acid within the Aβ region of APP, specifically at position 7 (D7N). The mutation does not affect Aβ generation from APP (Hori et al., 2007), but does alter the assembly kinetics of the peptide. Mutant Aβ displays accelerated secondary structure transitions and an increased propensity to form relatively large oligomers. The oligomers are also more efficient nucleators of fibril formation, and are significantly more cytotoxic than wild-type peptides (Ono et al., 2010). 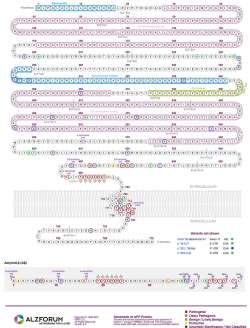