Meta-analysis Results: Meta-analysis of 19 comparisons showed that baseline levels of tau protein were significantly higher in people with mild cognitive impairment who went on to develop Alzheimer’s dementia than in those who did not decline at follow-up. As a group, those with prodromal AD consistently had levels nearly twofold higher than those with stable MCI (effect size = 1.730, p <0.0001). 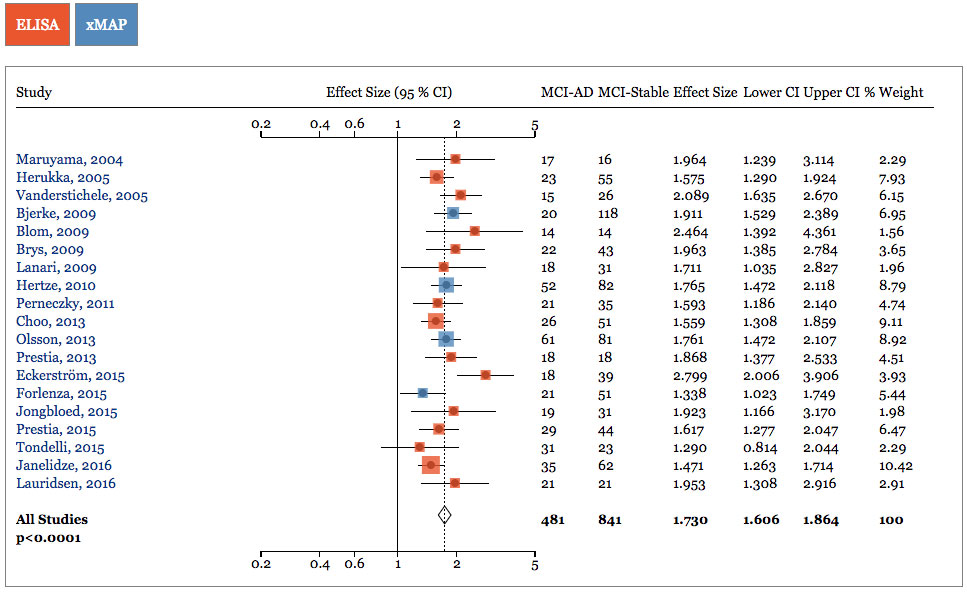 How to interpret a forest plot: Each individual effect size (ES) is a ratio of the mean biomarker level in one condition over the mean level in another condition. An ES equal to 1 means that the two conditions had identical mean values. An ES > 1 indicates higher levels in the first condition, whereas an ES < 1 indicates lower levels in the first condition. The overall ES, indicated by a black diamond, is a weighted average of the individual effect sizes. The weight of each data point was determined by the inverse of the variance and is reflected in the size of each square. The width of the overall ES diamond is determined by the 95 percent confidence interval. Data out of range of the scale, including ES and confidence intervals, are indicated by an arrowhead at the edge of the plot, when applicable.